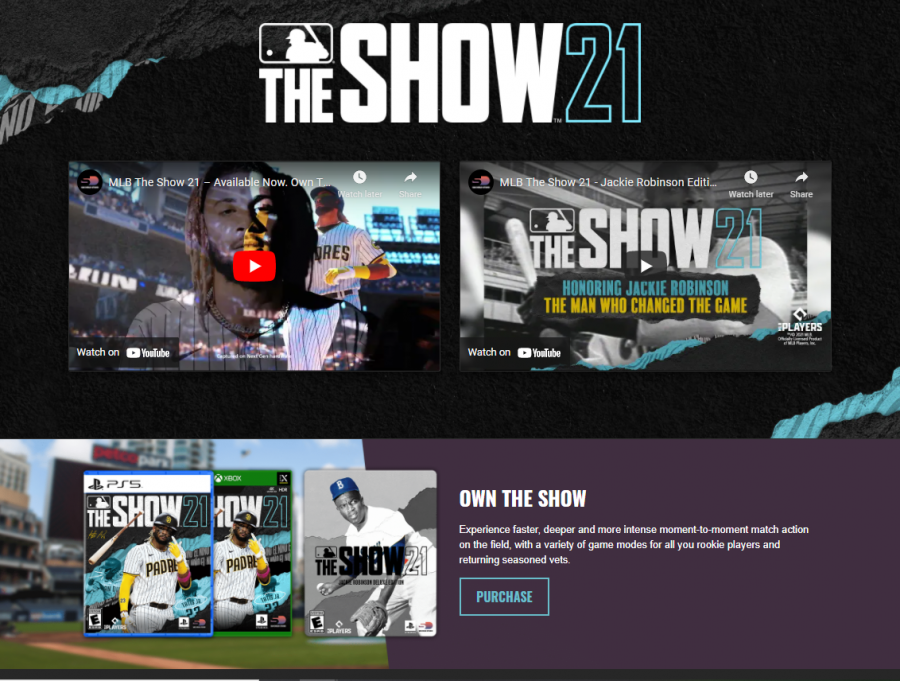 The website shows potential buyers some of the features of the new version of "The Show."

The video game “MLB The Show 21” is coming to the Xbox store for the first time in over a decade. Players of “The show” are ecstatic about this latest development as it’s been a long time coming.

MLB The Show 21, otherwise known as “The Show” is on the market on Xbox for the first time since 2006 according to Bleacher Report. A new game of the series has been coming out every year since 2006. According to The Verge, Sony sponsors the game, and they happen to be responsible for sponsoring PlayStation as well, hence the reason it has only been featured on PlayStation all this time.

Baseball video games that are not a part of “The Show” series have been around since 1978 when it was played on the Atari 2600 according to Bleacher Report. Other servers that the game has been featured on are the Nintendo, Xbox, PlayStation, and Wii.

This year’s game “MLB The Show 21” was released on April 20. It was entirely the decision of Major League Baseball to make the move to Xbox and had nothing to do with Sony according to IGN. The game costs $69.99 on the PlayStation 5 and Xbox Series X|S. Both of these game consoles were released within the last year and feature an assortment of improved features, for instance, graphics of the game. On the PlayStation 4 and Xbox One, which have been out since 2013, the game only costs $59.99.

This price can affect one’s decision to buy the game. “In the past I’ve tried to find deals because that price range seems a little bit high to me,” prospective buyer Hadley Stevenson said.

“The Show” offers players the ability to hone their skills by selecting the difficulty they want to play on. It offers dynamic difficulty too, where the difficulty of the game changes based on how well or poorly one is playing. Additionally, there are different techniques in which one can choose to go about baserunning, pitching, fielding, and hitting.

“I have a couple friends that play the game, and they’ve told me that it is the best baseball game out there,” Stevenson said.

With all the customization options, it has many video game players sharing similar opinions.

In addition to choosing between ways to customize players, techniques, and stadiums, choosing a game mode to play is a vital decision. The four main game modes are Franchise, Road to the Show, March to October, and Diamond Dynasty. Each one offers a vastly different experience.

Franchise mode allows someone to choose a team and play with their schedule for the season while controlling all the players on the team. Video gamer, Tyler Burns said, “My favorite mode is definitely franchise mode and lately I’ve been spending about one to two nights per week playing it for about an hour or so.” This mode also allows players to utilize the trade market and sign free agents to improve their squad. Burns added, “What I’ve tried to do is trade my way to get depth players that can really help out later in the season when my star guys get tired.”

Contrastingly, “Road to the Show” offers the chance to use one player and work through the ranks of the minor leagues into the major leagues. According to CBS Sports, the mode hasn’t been improved upon through the years and doesn’t offer a lot of variety to it from year to year.

March to October is relatively similar to franchise mode except that when using a team of choice, only the biggest, most suspenseful moments are played. “The Show” has been known by its players to provide suspenseful moments making it a loved game mode according to The Gamer.

Lastly comes Diamond Dynasty. Modeled off of Ultimate Team in EA Sports’ Madden series, it allows gamers to build a team with players from all different eras and teams. Diamond Dynasty first came to “The Show” in 2012, according to Kotaku. Players unlock achievements and collect currency in the game through completing challenges and games against other Diamond Dynasty players.

Upon mentioning Diamond Dynasty as his favorite game mode thus far in MLB The Show 21, video gamer Patrick Grady said, “Being able to have guys on my team that I’ve looked up to for so many years and being able to actually play with them has been really cool.” Grady said he bought a PlayStation specifically to play “The Show” a few years ago before it was available to Xbox and has been loving the game ever since.

While “The Show” has now been out for a month, Major League Baseball has been happy to provide a larger audience with a chance to experience an authentic sports game, according to IGN.

For more information, go to: https://theshow.com/