Living As The ‘Other’ 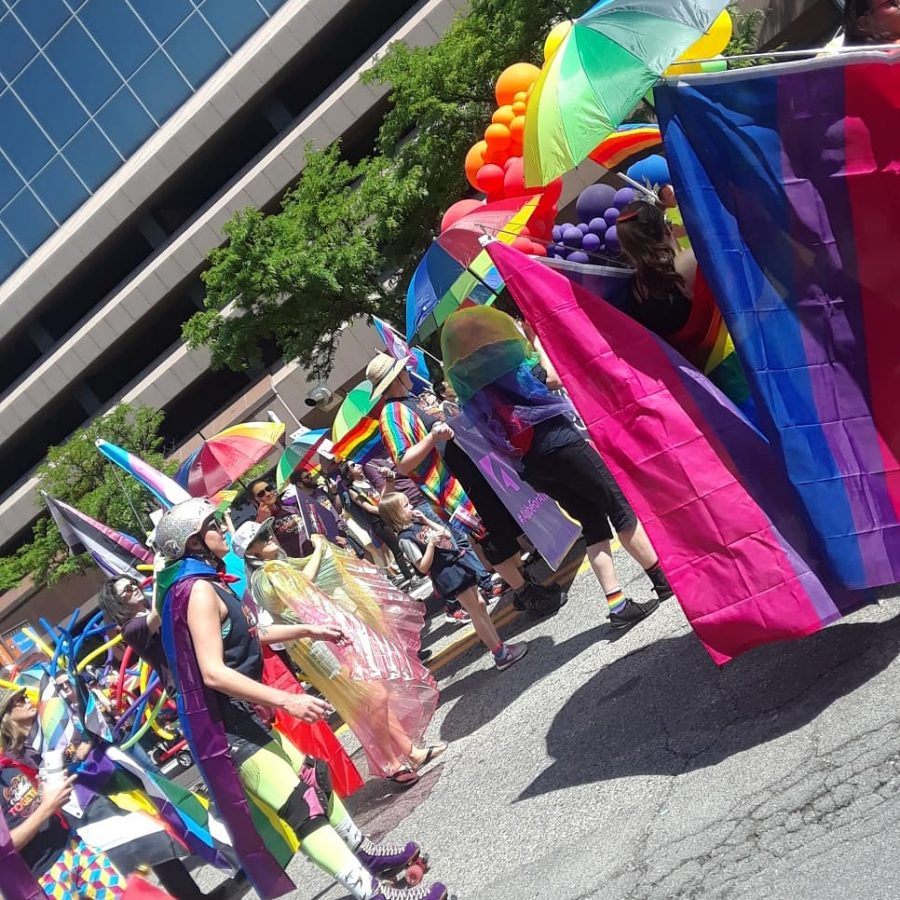 Families come together in a pre-COVID Pride, Salt Lake City, 2019.

For those identifying as anything other than cisgender, heterosexual, and allosexual (allocishet), the obstacles to overcome in finding one’s place in the world are numerous.

For sexual and gender minority youth, the representation allocishet people get to grow up with just isn’t there. According to “The Kids Are Alright — Understanding Gen Z” by Associate Director of Ipsos Connect Hannah Whyte-Smith, approximately 33 percent of Gen Z identifies as something other than strictly heterosexual. This percentage is not reflected appropriately in television, with only 18 percent of movies surveyed by GLAAD containing LGBT characters. This included films with even the briefest mention of a non-heterosexual character, and none of the films they surveyed contained transgender or non-binary characters.

“I enjoy seeing representation, but it’s always very similar. It’s always the same thing, like always being the side character in the drama. To be honest, it feels like a trope, more than an actual character, and I feel like that kinda minimizes us,” said Orono Senior Joshua Pusch.

“I feel like it helps raise children in a degree of heteronormativity that is damaging to kids that may question their sexuality or gender identity in the future, because in their formative years, if there is nothing on TV or in films or whatever, then there’s this internalized feeling like ‘I don’t see people like me. If the famous beautiful people aren’t like me, then there must be something wrong with me,” Orono senior Sky* said.

Lack of representation can lead to more than just feeling left out. If LGBT+ children are not exposed to any sort of representation, it can add years of stress and questioning on to their journey. Figuring oneself out young is especially important for transgender youth, as finding out they are not cisgender in time can lead to them being put on hormone blockers before they hit puberty. According to the Mayo Clinic, being put on hormone blockers in time can lead to decreased levels of depression and anxiety, improved mental wellbeing, and it can help avoid surgeries in the future.

“If I had had exposure to queerness I may have learned that I was queer way before I did,” said Caleb Nesser, a 27 year old Minnesotan.

“I didn’t even realize that I liked women until this past year, and I’m 17 years old. There is nothing that I could have seen on TV and been like, ‘oh, maybe that’s something I would like to try, or somebody I would be attracted to.’ I didn’t even consider it an option until I had seen and been exposed to more people who are like me,” Sky said.

Every part of life for LGBTQ+ people is impacted by the fact that being allocishet is seen as the default. According to Human Rights Watch, there are laws against homosexuality and being transgender in at least 69 countries, 7 of which impose the death penalty, and civil marriage is only open to homosexual couples in 29 countries.

While the US may now have nationwide marriage equality, it’s not all sunshine and rainbows. According to Freedom For All Americans, In only 21 states and the District of Columbia are LGBT+ people fully protected from discrimination. Furthermore, according Professor Cynthia Lee of George Washington Law School’s “The Gay Panic Defense,” gay panic arguments have been used for decades in the court system to free people who claim that they killed gay men because they made unwarranted advancements on them.

While many people are told constantly to ‘just be yourself,’ the way one acts can literally be a matter of physical safety for LGBT+ individuals. According to a study done by Ilan Meyer, Distinguished Senior Scholar of Public Policy at the Williams Institute in UCLA, LGBT+ individuals above the age of 16 are 4 times more likely to be the victims of violent crime than their allocishet counterparts. This is higher for women, at 5 times more likely.

“Just this morning in the parking lot there were some guys hanging out around this pickup truck and I was like, ‘Oh no, is this the day that I get stabbed in a parking lot, is my car about to get keyed?’ Am I gonna come out to my car and then have a slur spray painted on the side or something?” Schulte said.

“I don’t fear for my safety in the same way I would fear telling someone I’m a lesbian. I just fear getting comments and getting judged about my intimate life, which almost feels worse than just straight homophobia. It just feels more personal,” OHS junior Willow* stated of her asexuality.

According to the article “Suicidal ideation and attempts in North American school-based surveys: are bisexual youth at increasing risk?” by Saewyc et al., between one fourth and one third of surveyed LGB adolescents had attempted suicide, compared to less than one tenth of their heterosexual peers. While allocishet individuals are not immune to struggling, they do not struggle due to their sexuality or gender, so they have one less thing holding them back.

Schools in the United States are not required to include LGBT+ representation in sex-ed courses, and are not required to promote inclusivity inside the classroom, and though some schools do make an effort to do so, in some states its illegal to talk about LGBT+ topics. “No promo homo” laws forbid teachers from discussing LGBT+ topics, Alabama’s state code going so far as to say that “Classes must emphasize, in a factual manner and from a public health perspective, that homosexuality is not a lifestyle acceptable to the general public and that homosexual conduct is a criminal offense under the laws of the state.” GLSEN reports that there are currently 8 states that implement these so called “no promo homo” laws, and GLSEN’s 2009 National School Climate Survey showed that in states with those laws LGBT+ students were more likely to hear homophobic comments, less likely to report those instances, and less likely to report support from the educators.

“It’s always ‘when you have sex,’ ‘when you do that,’ or he/she on so many worksheets and packets. It’s ridiculous. Just say ‘they’ and move on. Like, ‘Hi, I exist!’ Can you not completely erase part of the student population, please?” Schulte said.

According to Human Rights Watch, eight states currently have ‘Religious Exemption’ laws that exempt people from non-discrimination laws if they claim those laws infringe on their religious beliefs.

“Struggling with my sexuality really impacted my relationship with my religion. As of right now I do still identify as a Roman Catholic, but my relationship with that has become a lot different. I am afraid to come out to people, especially my church because I know a lot of people there who would not support the way that I feel, and would like tell me things like ‘I’ll pray for you,’ and ‘That’s an abomination; you’re gonna go to hell,” Sky said.

It’s not only LGBT students that suffer from a lack of inclusive education and representation. Not understanding LGBT+ people can lead to everything from insensitive comments to full-on bullying. According to Rebecca Damante at The Century Foundation, schools that incorporated an inclusive curriculum reported significantly less incidents of harassment and bullying due to sexuality than schools without inclusive curricula.

“Think of all of the media that you take in regularly. Now imagine every single one of those characters was just utterly alien to you and you can’t understand what they’re saying, you can’t relate to them at all. Imagine that that’s everything. There’s nothing for you. That’s what it feels like to be queer, a lot of the time. Maybe now you can understand why queer people are asking that you share that space a little bit. Nobody’s asking you to give up representation, no one’s asking you to surrender everything to the new wave of queer people that’s coming. We’re asking you to share the space so that we can see ourselves too, and so that maybe you can see us sometimes, so that maybe you can watch something that is good queer representation and you can feel some empathy towards your fellow fellow human beings. That’s what we are. We’re all human beings and we all share this planet together,” Nesser said.

*Pseudonyms have been used to protect the identity of some students.