The Spartan Speaks • May 8, 2020 • https://spartanspeaks.com/16215/features/whos-got-it-worse-the-unending-one-upmanship-between-students/

Who’s got it worse?: the unending one-upmanship between students. 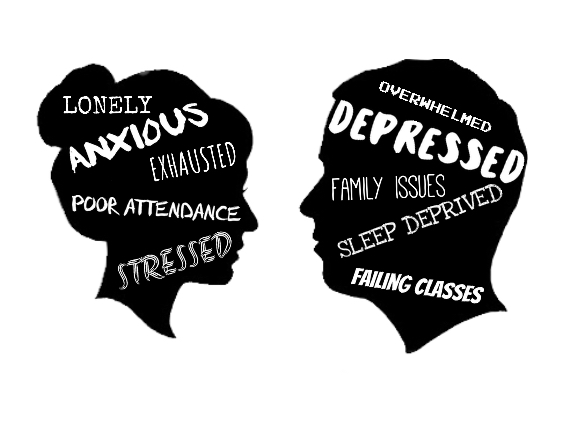 Two silhouettes of faces with text inside them show issues and struggles common among teens and young adults.

An all too familiar conversation leads to passive self-harm when the comparison competition of “who struggles most?” ensues among peers. From lack of sleep to mental health, illness and physical ailments: the list goes on and on.

“It’s devaluing,” senior Molly Martini said, “It’s like if I complain about anything, someone feels obligated to tell me that they have it worse than I do.”

High school-age students are constantly comparing themselves and being compared to others. Media coverage usually draws light to either upward or downward social comparison.

However, these categories don’t cover this form of negative downward comparison.

“When I tell people about how little sleep I got and they immediately come back with how they got even less, it makes me feel like I am sleeping too much or slacking off in a way,” junior Henry Strommen said.

If teens feel inferior for getting “too much sleep” in the eyes of their peers, unhealthy sleep habits, and negative mentalities surrounding the importance of sleep begin to form. Lack of sleep can have a greater impact than teens can predict.

Better Health Channel discusses why getting enough sleep is very important for teens. They prove their theory by listing more than a dozen effects of sleep deprivation including difficulties with concentration, shorter attention span, uncharacteristic behavior, and poor performance in school and extra-curricular activities.

Sleep, however, is not the only aspect that falls prey to this one-upmanship. Mental health is a common aspect of teen life and grows more prevalent each year. A 2017 survey performed by the National Institute of Mental Health revealed that teens and young adults held the highest percentage of major depressive episodes. The levels for this age group were higher than any of those attributed to any other age group. Furthermore, age was proven to show the highest correlation to the level of depressive episodes over other life factors such as gender or race.

“Being compared to others makes any negative feeling worse. If I am ever trying to express something going on in my life to anyone, I run the risk of being told that my problems aren’t problematic enough. It keeps me from wanting to share my struggles with other people,” sophomore Riviera Wock said.

The American Psychology Association performed a study proving that the rates of suicide-related actions, thoughts, and severe psychological distress among teens have increased over 70% between 2008 and 2017.

An article written by Raychelle Cassada Lohmann for U.S. News elaborates on this study by relating these statistics to possible causes. Lohman points to lack of sleep, uncertain times, lack of community, and overstimulation as possible culprits for modern-day teenage psychological distress.

“Being compared to someone else doesn’t help anyone or make anyone feel better. I wish it wouldn’t happen, but sadly it is a common occurrence in high school life” sophomore Harper Randolph said.

Students feeling under-supported by peers or community members can keep them from reaching out for help when they need it. Fear of being judged or devalued keeps them silent while being made to feel like they’re doing something wrong changes their habits for the worse. Dissolving the toxic pattern of belittling certain struggles is vital to fostering a mutually beneficial, supportive and honest student culture among teens and young adults everywhere.