The Spartan Speaks • May 16, 2019 • https://spartanspeaks.com/14862/opsedit/reviews/the-local-serves-up-tasty-irish-food-and-atmosphere/

The Local Serves Up Tasty Irish Food and Atmosphere 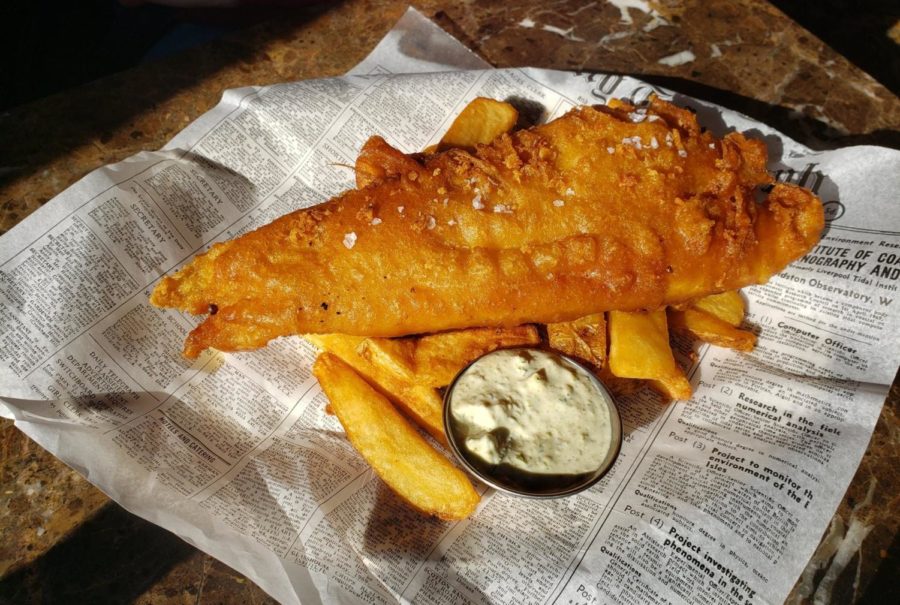 Fresh made fish and chips is served at the Local West End.

Boasting a cozy, yet playful ambiance, The Local serves up traditional Irish pub fare with a matching atmosphere. At either of its two locations, Minneapolis or West End, one can find fresh-made fish and chips, rubens, and even corned beef and cabbage.

The Local started at its Minneapolis location on December 17, 1997, according to The Local. The pub’s interior is adorned in dark mahogany, whether it be the walls, bar, booths, or dividers. At both locations, The Local features a main bar, a separate quieter dining area, and several enclosed booths surrounded by mahogany and carved glass dividers.

Cara Irish Pubs owns several Irish pubs in Minnesota, including Kieran’s Irish pub and The Liffey. Each pub is made with unique elements, for example The Local has an 80-foot bar with a hand-carved back bar, and The Liffey was built in Dublin, Ireland before being set up in St. Paul, according to Cara Irish Pubs. According to The St. Paul Historical, St. Paul was home to several small Irish communities, making the presence of the pub fitting.

At the Minneapolis location, diners are offered gluten-free selections, whereas the West End does not, however both offer otherwise the same meal and dessert options. Both have full sized dinner options, but also have a ‘Wee Lunch’ menu that features smaller portions of their most popular dishes, along with a drink and side for $11.

The fish and chips, one of the Local’s most popular items, is a large piece of cod or, for an extra $5, walleye, fried golden brown and served on a bed of fries for $16.50. The breading is crispy, giving a good textural contrast to the soft, flaky fish inside. The fries are steak-fry style, and are well salted and flavorful. At the West End location, the fish was slightly greasy, whereas at the Minneapolis location, the fish was crispier and lighter in grease.

For more classic ‘American’ fare, the Minnesota burger is a delicious option. The burger is made from Minnesota angus beef, and is topped with cheddar cheese, tomato, onion, lettuce, and pickles, costing $15. It is served with a side of mixed greens, fries, mashed potatoes and gravy, soup, or sweet potato fries.

Service at both locations is very good. Servers are attentive and helpful when ordering, along with checking in on diners after they try the food. Due to the burger at the West End location being overdone, the dessert was also offered for free. Service is quick and attentive, and overall was a pleasant customer experience.

Overall, the food at the Minneapolis location seems to be better prepared, with a crispier, less greasy fish, and burgers cooked properly to order. However, both locations feature equally delicious flavors and are worth a stop for some classic pub food. I would give The Local Minneapolis a 4.5 out of 5, and The Local West End a 3.5 out of 5 due to the overcooked burger and presence of more grease in the fish.